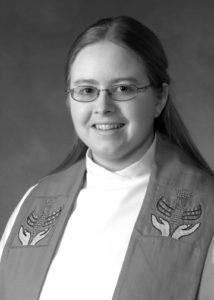 Since August 2017, the Rev. Amanda Currie has been serving as a Minister of Word and Sacraments at First Presbyterian Church in Regina, Saskatchewan.

She grew up in Ottawa, Ontario, where she attended St. Giles Presbyterian Church with her family. Her father served at St. Giles as an elder, and her mother worked in the church office as the Secretary/Bookkeeper. As a young person, Amanda was involved in Church School, Vacation Bible School, singing in the church choir, Presbyterian Young People’s Society, and she worked for six summers at Gracefield, the Presbyterian Camp in Québec.

Amanda earned a B.A.Sc. in Gerontology from the University of Guelph in 1997. She then worked in a group home in Ottawa for three years, while taking some biblical and theological courses at St. Paul University. Amanda attended Knox College in Toronto from 2000-2003, and was ordained November 16, 2003 just before moving to Saskatchewan where she served at St. Andrew’s Presbyterian Church in Saskatoon from 2003-2017.

Amanda has been married to Nicholas Jesson since 2001. Nick is a Roman Catholic theologian who is currently serving as the Ecumenical Officer for the Archdiocese of Regina. As an interchurch couple, Amanda and Nick made an intentional decision that neither of them would “switch” churches when they got married. But instead of “going their separate ways” on Sundays, they worship together in both Christian communities instead. That means that Nick is an active adherent in the Presbyterian Church, and Amanda takes part in Catholic parish life as well.

In 2013, Amanda began to work on a Doctor of Ministry degree through the Toronto School of Theology and Knox College. The focus of her research is on Interchurch Families, with particular interest in how Presbyterian ministers provide pastoral care and guidance to denominationally-mixed couples and their families. Amanda is taking a one-year leave from the program while she begins a new ministry in Regina.

Amanda has served The Presbyterian Church in Canada as an interim moderator, Clerk of the Presbytery of Northern Saskatchewan, Presbyterian representative for the Truth & Reconciliation Commission’s National Event in Saskatoon, small group leader at Canada Youth conferences, adult advisor for Saskatchewan Presbyterian Youth, Chaplain at Camp Christopher, and on the Assembly Council.

As a congregational minister, Amanda enjoys leading worship, preaching, and celebrating the sacraments. She loves to sing, and appreciates opportunities to make music with others for the glory of God. Although Amanda does not love committee meetings, she appreciates the opportunity to work with elders and lay members in the ministry that we are called to enact together in the church. She believes that fruitful ministries grow when all God’s people have the opportunity to discover and use their spiritual gifts in the Body of Christ.

In her spare time, Amanda enjoys walking, yoga, baking, crocheting, colouring, and most of all, spending time with her husband.