Christ is risen! He is risen, indeed!

Do you believe that? And if you do believe it, what difference does it make to you? How does believing in the resurrection of Christ change your life? How does it affect how you feel or how you live? The Apostle Paul explores these questions in detail towards the end of his first letter to the Christians at Corinth.

You may remember that the Corinthians were struggling with a lot of issues and conflicts over what they believed and how they practiced their faith. After sorting out their issues with leadership, divisions, the Lord’s Supper, spiritual gifts, and orderly worship, Paul finally gets to the really big one – the question about resurrection.

In verse twelve, Paul expresses the main issue: “Now if Christ is proclaimed as raised from the dead, how can some of you say there is no resurrection of the dead?” Some in the Corinthian community rejoiced in the resurrection of the crucified Christ. Like us, they proclaimed: Christ is risen! He is risen, indeed! But they weren’t so sure that the rest of us would also be resurrected – at least not in any kind of bodily way.

Their resistance was likely due to the Hellenistic worldview that pervaded their culture and regarded the body as transitory at best and evil at worst. After death, our souls may live on in some way, they would say, but certainly not our bodies. Our spirits are released from their limiting cages, while our bodies rot in our graves.

Beverly Zink-Sawyer explains that Paul has a different view from the typical Greek assumptions about the afterlife: “Paul challenges the assumptions of the Corinthians by declaring that our bodies are so valued by God as to be redeemed by means of resurrection. In that way, he denies the prevailing ideology of a soul/body dualism and confirms the continuity of our identity and our whole being after death as we are caught up into the life of God through resurrection.”

Christians today have a lot in common with the first-century Christians in Corinth. We also live in societies that are diverse in culture and religion, and we also are influenced by pop culture and general attitudes about life, death, and more.

We, like other Christians, regularly say the Apostles’ Creed, often when we are celebrating sacraments. And in that ancient creed, we affirm our belief “in the resurrection of the body.” When we do that, we’re not just talking about Jesus being raised, but we’re voicing our confidence and hope that we also will be raised.

As Paul explains it, Christ’s resurrection from the dead is described as the “first fruits of those who have died.” It’s a reference to the Old Testament image of “first fruits” as related to Jewish sacrificial practice. When the people of Israel reaped the harvest of the land God had given them, they were asked to bring the “first fruits” of their harvest to the priest as an offering or a sacrifice of thanksgiving.

So, if Christ is the “first fruits” of those who have died, then there is the promise of more to come. Christ is the first to be raised, but he is by no means the last. In fact, Paul suggests that it is through Christ’s resurrection that the gift of everlasting life will be accomplished for the rest of us as well.

There are several different ways of thinking about how Jesus is our Saviour and how he accomplished his mission of bringing us back into right relationship with God. “Living Faith,” our Presbyterian Church’s statement of Christian belief names these different understandings of atonement in its third chapter:

God’s reconciling act in Jesus Christ is a mystery
which the Scriptures describe as
the sacrifice of a lamb,
a shepherd’s life given for his sheep,
atonement by a priest.
It is also the innocent dying for the guilty,
the ransom of a slave,
payment of a debt,
and victory over the powers of evil.

It’s that last one that is revealed in our text from 1 Corinthians today. And I appreciate the way Paul describes what Christ has done for us – what some theologians have named “Christus Victor” because Christ has fought against and conquered all the evil powers of the world.

It makes me think of Jesus in his earthly life, questioning authorities, defying unjust rulers, and calling out those who perverted the faith with greed and injustice. I think of Jesus healing diseases, stilling storms, and casting out demons. I remember him welcoming outcasts, upsetting unjust social norms, and confronting the powers that kept people down and out.

And then, as Paul says, “when he has destroyed every ruler and every authority and power,” he faces the “last enemy” that must be destroyed, which is death. 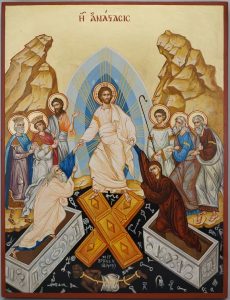 What Christ does to destroy the last enemy is vividly displayed in Orthodox Christian iconography. Joseph Small explains that “Anastasis icons (that’s Greek for “resurrection”) depict the resurrection of Christ in an unexpected way. They do not picture any empty tombs or the risen Christ’s appearances to disciples. Instead, resurrection is depicted by Christ’s descent into hell, the place of the dead!

“Anastasis icons… often show the raised, glorified, and descended Christ standing with the broken gates of hell beneath his feet. He reaches down to grasp the hands of Adam and Eve, drawing them out of their caskets. Around this central focus, the icons typically picture David and Solomon, Moses and the prophets, John the Baptist, and anonymous representatives of all who have died. Symbols of the disciples represent the living who will also die.

“At the bottom of the icon, almost concealed in darkness beneath Hades’ shattered gates, lies the satanic figure of death, now vanquished by Christ and, in Christ, now conquered by those who have died. ‘In fact,’ says Paul, ‘Christ has been raised from the dead, the first fruits of those who have died’ (v.20). The icon depicts the fullness of the harvest.”

To believe that our whole selves will be resurrected is not somehow to believe that our physical bodies will stand up from the grave, like Lazarus did, and come walking out again. We don’t need to worry about keeping our physical bodies intact by choosing traditional burial rather than cremation. And we need not imagine that if we die at 95 years old that we’ll be stuck forever with an old and worn-out body for eternity.

Later in the chapter, Paul asks the obvious questions on the Corinthians’ minds and on ours: “How are the dead raised? With what kind of body do they come?” (15:35). And Paul believes it will be a “spiritual body.” Not a bodiless spirit, but a transformed body.

Of course, like many things in our faith, the details remain a mystery. Nonetheless, the assurance that Christ has destroyed the last enemy of death, and the promise that as Christ was raised, we also will be raised – these things should prompt us to live differently in the world.

If we truly believe that Christ was raised and that we will be raised, we will be free to live without fear in the world. I don’t mean that we will intentionally choose risky behaviours like dare devils who speed around recklessly on the highways or can’t be bothered to follow health and safety protocols.

But we will be willing to accept certain risks in order to help others during a pandemic, or to jump in and provide assistance when someone is drowning, or to stand between a vulnerable person and danger when we need to.

With the assurance of God’s saving love for us, we won’t always need to safeguard our own well-being first, but we’ll be free to give generously for others in need, and to spend our time and attention on others too. The most striking examples are the ones we see in every generation, currently in the war in Ukraine, where people are ready to put themselves in physical danger to help others.

And if we believe, like Paul did, in bodily resurrection – that our whole selves will be raised to new life, not just our disembodied souls or spirits – it should lead us to a deep gratitude and respect for the bodies in which we live today.

We live in a society that is deeply ambiguous about the human body. On one hand we are obsessed with our bodies, while on the other we denigrate them. Human bodies, and especially female bodies are sexualized and abused. Racialized bodies are hated and rejected based on various bodily characteristics, especially skin colour.

We are all pressured to achieve perfect bodies, according to current fashions and ideals. Certain colours, shapes, and sizes are valued over others. Ordinary people are held captive to unattainable ideals, and we learn to dread aging, deformity, disability, and disease.

Our belief in both the resurrection of Christ and the resurrection of human bodies affirms the goodness of creation. Bodily life is not a lower form of existence, to be disdained or discarded. Our bodies, with all their diversities and imperfections, are gifts from God to be celebrated and enjoyed.

To believe in the resurrection does not mean that our only focus is on getting to heaven and what happens after we die. It is a belief that frees us to live faithfully, joyfully, and well in the world today, because we trust that our whole selves are in God’s hands.

Friends, rejoice with me today because “Christ is risen! He is risen, indeed!” Christ has been raised from the dead, the first fruits of those who have died. He has destroyed every ruler and every authority and power, including the last enemy, which is death.

Christ has reached into our graves and raised us up, so let us live today in the freedom of life everlasting that begins in our bodily lives right now.