That’s such a great Gospel reading for Saskatchewan, don’t you think? “Every valley shall be filled, and every mountain and hill shall be made low…” God is making a beautiful, wide-open prairie! That’s the vision of the Kingdom of God when Jesus is coming into the world!

These are the words of John the Baptist when he begins preaching out in the wilderness, calling the people to repent and to “prepare the way of the Lord” who is coming (in Jesus, as we will soon see) to save all people from our sin and sadness.

John is quoting from another prophet centuries before him, Isaiah, who proclaimed similar words to the people of Israel who were in exile in Babylon. It seemed to them like God had abandoned them there, but God was coming, he assured them. They should be ready to welcome God, who was going to come and bring them home.

The image of the people “preparing the way” probably came from practices associated with welcoming royalty. It was like rolling out the red carpet, making sure that the monarch would have a smooth ride in coming to visit the community.

When we talked about this in Bible study this week, folks remembered many years ago when Queen Elizabeth II came to visit Saskatchewan. Apparently, part of her tour included going to visit a farm outside of Saskatoon. In preparation for her visit, they paved the grid road she would have to travel on – all the way up to the farm itself. They couldn’t have the Queen’s vehicle hitting any pot holes or getting a chip in the windshield from the flying gravel the rest of us have to deal with all the time!

If we pave a road for a queen, what do we do when God is coming to visit us?

The prophet Malachi spoke of a messenger coming to prepare the way of the Lord. And he suggests that the preparations needed will be significant and challenging. He wonders who can endure the day of his coming, and who can stand when he appears:

“For he is like a refiner’s fire and like fuller’s soap; he will sit as a refiner and purifier of silver, and he will purify the descendants of Levi and refine them like gold and silver, until they present offerings to the Lord in righteousness.”

The “descendants of Levi” are the priests in the temple – the religious officials – and they will be asked not to put out red carpets and smooth out the pathways for the Lord’s coming, but they will need to prepare their own hearts and lives. What they do in their service of worship must match up with what they do out in the world. If it doesn’t, their offerings in worship become meaningless, hypocritical. God will be pleased when they prepare their hearts, when they confess their sins, when they present offerings to the Lord in righteousness.

And that matches up with John the Baptist’s preaching when he appeared in the wilderness as a messenger who was announcing the coming of the Lord in Jesus the Christ. He also called the people (not only the priests and religious leaders, not only the Jewish people or the Gentiles, but all people) to prepare for God’s coming by preparing their hearts and lives through repentance and forgiveness.

“He went into all the region around the Jordan, proclaiming a baptism of repentance for the forgiveness of sins.” The Greek translated as “repentance” is metanoia which literally means “change of mind” or “change of heart.” It’s a thoroughgoing and ongoing shift and reorientation in which we turn away from sin and towards God.

We leave behind habits of self-centeredness, greed, and pride, and open ourselves to be led by God into new practices of hospitality, generosity, and compassion. And by God’s grace, we receive forgiveness, which is more than just another chance to try again. The Greek word is aphesis which means “release.” The idea here is to be released from sin, as if from a form of captivity or enslavement.

Think of the Exiles finally getting the chance to return home. Think of the Exodus, when their ancestors were released from slavery in Egypt.

In the Book of Exodus, the Hebrew word for “Egypt” is mitzrayim, literally, “the narrow places.” Luke presents Jesus’ ministry as a New Exodus, a liberation or “release” from the narrow places of sin, oppression, enslavement, violence, conflict, and despair. A new era of God’s shalom is dawning, John insists, his voice ringing out in the wilderness to all who are ready to listen.

But this peace of which he speaks isn’t simply the absence of discord. Rather, it’s the presence of genuine freedom, liberation from whatever is holding us back from becoming living testimonies to God’s good news for all creation. Our lives are full of “narrow places” (think: hostilities, resentments, isolation, addictions, apathy, stress, injustice, ecological ruin) – and Jesus is coming to “proclaim release to the captives.”

The prophets cry out to us to prepare the way of the Lord. Instead of being stuck in the “narrow places” we are invited to come out into wide open spaces where we can see, and breathe, and recognize Jesus coming to us.

So, I don’t think the repentance we are called to in this season is about madly trying to add some more religious things into our lives – as if we could save ourselves through more worship, more Bible study, or more tithing. I think, instead, we are called to open up space in our lives for Jesus to come and guide us in new directions.

As a pastor, my life usually gets more hectic in Advent, and I think the same is probably true for many of you. I appreciate this little comic from the Episcopal Church that illustrates the challenge of doing Advent well for busy church folk. 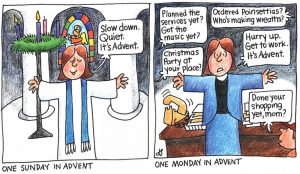 But one thing I did do this Advent was add one extra thing that would actually help me to slow down and make space for Jesus. For the sixth year in a row, I’m doing the “Walk to Bethlehem.” It’s a commitment to walk every day, which I would be doing anyway.

But there is a Scripture verse each day on which to reflect, and a goal to walk the distance from Nazareth to Bethlehem (which is 111 km), joining in the journey of Mary and Joseph in the days leading up to Jesus’ birth.

This year, I invited First Church folks to walk with me (either on your own in your own neighbourhood or in the church gymnasium, literally “with me”). And doing that got me away from working at home. It got me back to walking to the church to walk with the people.

I’ve been in the habit lately of doing a lot of my walking on the treadmill while watching TV, which is fine for exercise, but not so good for the spiritual benefits of walking.

So, in the last week, I’ve opened up space in my busy life during Advent to think, reflect, and pray as I walk. And I have been reminded once again, that I need to open up space in my life, quiet in my mind and heart in order to see Jesus coming.

I wonder how you are making space for Jesus coming in your life this Advent.

And I wonder how God is calling us as a congregation to make space in our community for Jesus coming among us this Christmas. I think that preparing the way of the Lord among us means having open minds, and expecting God to do something new, in a new way, involving new people. I think it means having open hearts to welcome others and make space for them and all that they will bring to our community.

As we continue to adapt to the new realities of our changed world after a pandemic, I think it means not getting stuck in the “narrow places” of the ways we have always done ministry, and opening ourselves up to the wide open spaces of what God may be calling us to do next.

The Apostle Paul encouraged the fledgling community at Philippi that he was absolutely confident that “the one who began a good work among [them would] bring it to completion.” And I am confident that the same will be true for us, by God’s grace.